SMOKING: In keeping with current State Legislation smoking is not permitted within the following areas: official’s tents, erected marquees, playing areas, toilets and food outlets. The area of a playing field includes the technical area and the spectator areas of each playing field. All School grounds are non smoking.
ALCOHOL: In accordance with the SCCSA By-Laws, no alcohol is to be consumed at Association sanctioned games or training.
DOGS: Under SCCSA by-laws, NO DOGS are permitted on SCCSA controlled grounds for fixtures, finals, training, representative games or carnivals.
HOME GROUNDS/TEAMS: Ground Official can be called on if required and should be identified clearly at home grounds. Seating for coaches, managers and reserves must be provided at least 1 metre from one touch line, either side of the centre line or flag. (Under 11s up) A barrier or line, 2 metres from the touch lines, and parallel to them must be in place. No one is allowed behind the goal lines. Games must start and finish on time – no period of grace is permitted. Five minutes before the scheduled kick off time, each team shall give the referee a properly completed team sheet and one match ball. A responsible person from each club will act as a lines-person as directed by the match referee to indicate whether the ball is in or out of play. (9s up) The Home Team is the team that is listed first in the fixtures. When two teams from the same club are playing each other, or where there is a clash of playing strip colours, the ‘away’ team must change strip or wear bibs for the game.
POINTS: Allocation of points for ages 11 (eleven) and upwards are: Win 3, Draw 1, Loss 0. Allocation of points for senior men are: Win 3 points; Score Draw 2 points; No-score draw 1 point. There are no points for U6’s to U10’s because they play non-competitive Roo Ball.
MERCY RULE: Game results will have a mercy rule and will be enforced with goal difference of 10 goals. The game will not stop once the goal difference is reached by one team. Referees will record all goals scored in the game but SCCSA ADMIN will record the end result with a goal difference of 10 goals only.
TEAM SHEETS: Team Managers must fill out, with full names & sign and hand to the referee five minutes before the scheduled kick-off time. Players must sign full name before entering the field of play. (Excluding 6, 7, & 8’s). For competitive age groups, the coach/ manager will inform the referee at the end of the game of their choice for the best and fairest player from the opposing team. If a player is late, place their name on the sheet and have them sign the team sheet as soon as possible. In competitive age groups, if a player who intends to play in a scheduled game has not signed the team sheet by the start of the second half of that game, they are ineligible to play in that game. When a player is ‘playing up’, his registered age group is to be placed beside his name on the team sheet. U6, U7, U8 teamsheet must be handed into the canteen after the game.
INJURY: If an injury occurs the referee may invite the coach (ONLY) onto the field to assess the injury and then that player must leave the field. If the player/coach etc sustains an injury during the game or at training then an incident report must be completed. We need to stress the importance of this due to the possibility that this could result in an insurance claim. An Incident Report Form needs to be completed and emailed into the SCCSA within ONE (1) WEEK of sustaining injury. Incident report form and claim forms are on our website.
PLAYERS ELIGIBILITY: The Team Eligibility page in this book shows the age a player must be to be eligible to play up an age division without dispensation. All players (including those playing up) must play 4 (four) fixtures in the same team to be eligible to play in the finals series for that team. Players that play up in a higher division 6 (six) times must remain in a higher age division team for the remainder of the season. A player may only play in the finals series in one team and in one age group. Only 5 representative players are allowed in one club team unless all the Rep players are ‘home grown’ this also Includes borrowed players.
REPRESENTATIVE PLAYERS: Representative Player trials are held at the end of the season so that squads/teams may be selected for the following year State Titles. Usual teams are: U10 – U16 North & South, U13 Girls, U16 Girls, U18 & Senior Men & Ladies. Contact your secretary for further details.
COACHES & MANAGERS: Coaches and Managers must wear distinguishing badges or shirts and should conduct themselves in an appropriate manner from the technical (interchange) area.
Refer to the ‘Codes of Behaviour’ 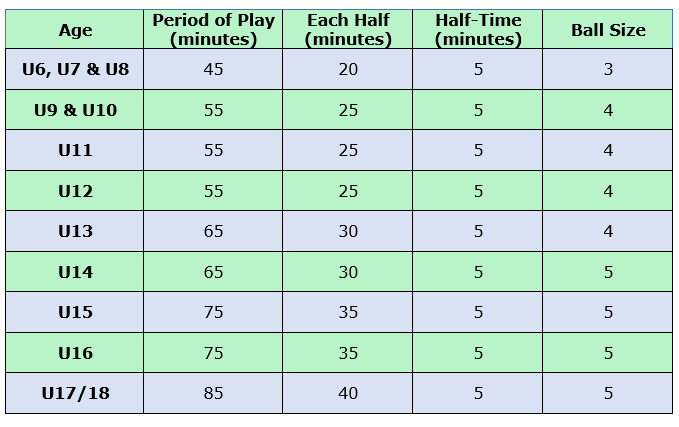